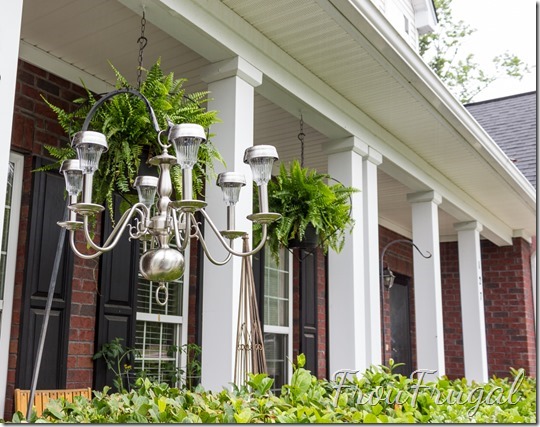 A few weeks ago I had the urge to make something fun and easy and I thought a solar light chandelier would make a nice addition to my front porch. I love me a good light project. There’s no shortage of sunshine in South Carolina and my desire to make my home stand out from our neighbor’s was all the incentive I needed.

I started by popping in to my local Goodwill one morning on my way to work. I found the perfect chandelier for $5.99. 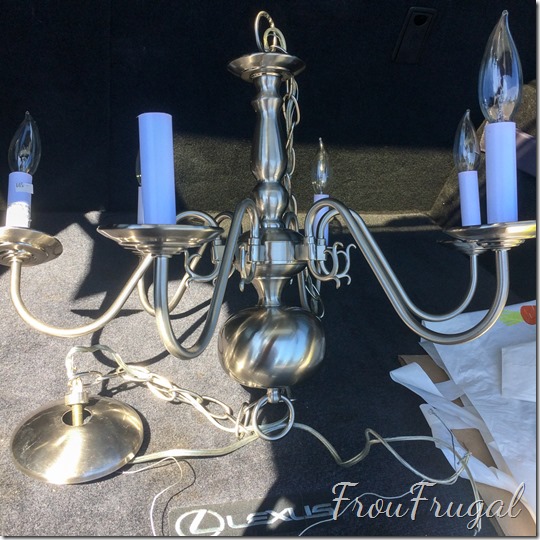 Next, I headed over to Dollar Tree on my lunch break at the recommendation of a co-worker. She’d bought some solar lights from there that were still going strong more than a year later. I found some lights and $6 later, I was ready to make my chandelier. Or so I thought.

You know it can’t be that easy, right? Cue the sad trombone music because I  realized that the solar lights were not going to just fit into the candle holders on the chandelier. The circumference of the light bulb socket and that of the solar light connector were identical. 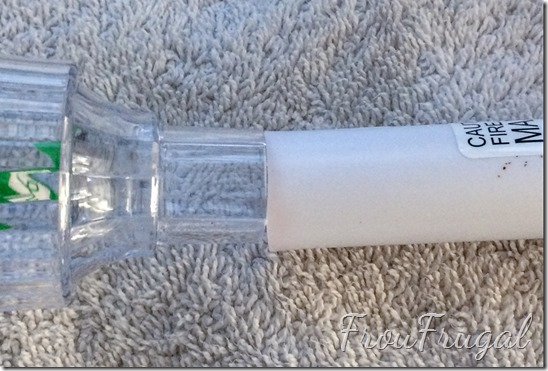 I needed another way to attach the solar lights to the chandelier. I made a stop to Home Depot on the way home and picked up a wooden dowel that would fit inside the solar light.

The next curveball happened when I  had to stop by Aldi’s to get some groceries for dinner, as one does. There I was, minding my own business, trying to figure out what groceries I needed, when I passed a selection of solar lights. The PERFECT solar lights for my chandelier. Oh, Aldi’s. You complete me!

Now, let’s be clear. There was nothing wrong with the first lights I picked up. While the shape of the light was a little ho-hum, I could live with it. The color didn’t match the chandelier, but I could fix the that problem with a little spray paint. At first when I bought the lights, I wasn’t hugely bothered by the hammered metal finish. As the day wore on, though, it started to chafe a bit. I didn’t like the idea of combining the brushed metal of the chandelier with the hammered metal look on the Dollar Tree solar light. 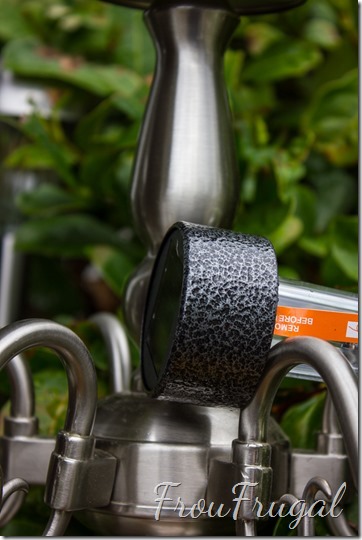 While I was in Aldi’s, though, it was like the heaven’s parted and shone a beam of celestial light guiding me to a solar light that was the exact same color and finish as the chandelier. At $1.89 each, they were a bigger investment, but even I am not so cheap as to quibble over the extra $5.34 for the perfect light. I was excited to get home and start working on my project right away, but Hubs and I were hungry and there was dinner to be made. 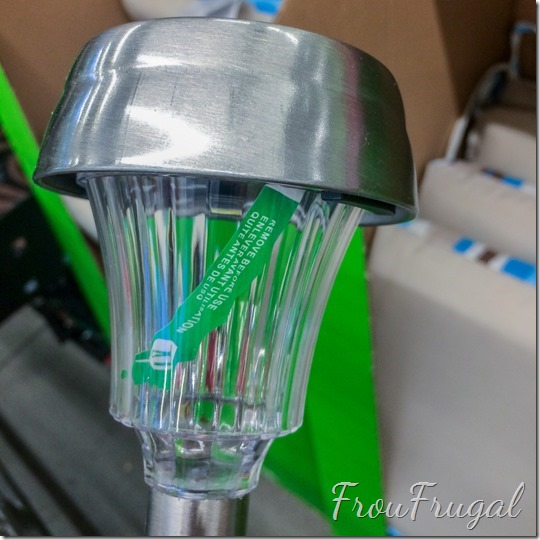 Truth be told, I was actually annoyed to be hungry. If you have followed me for awhile now, you know about my struggle with depression. It’s been a long time—probably a good three years—since I’ve been this excited to work on a project. Certainly, I’ve done projects during that time, but none have truly gotten me giddy and energetic about doing them. With depression, I often have the sense that I need to strike while the iron is hot. This feeling has led me to work frantically when the mood and energy are upon me. Pesky little annoyances, like eating, would often be ignored to get my project done.

However, it was this type of thing that brought me to my knees and caused my burnout. I am trying to learn from my mistakes. I knew I needed to stop and do first things first. This meant my project did NOT get done that night. It easily could have if I’d had all the parts in place. All told, it took probably an hour to make.

After dinner, though, I ran into several road blocks. First, I discovered that the wooden dowel I’d bought for the first lights, was too small for the second ones. I’d need another dowel. Second, I wanted to attach the wooden dowel to the candelabra socket with some zip ties. However, I couldn’t find our zip ties. They were hiding on me. Fine. Since I have to get a new dowel, I’d just pick up some zip ties. Finally, my third roadblock presented itself in the form of not one, but two old hack saw blades. The second blade wasn’t so bad and could kind of get the job done, but the noise it made! 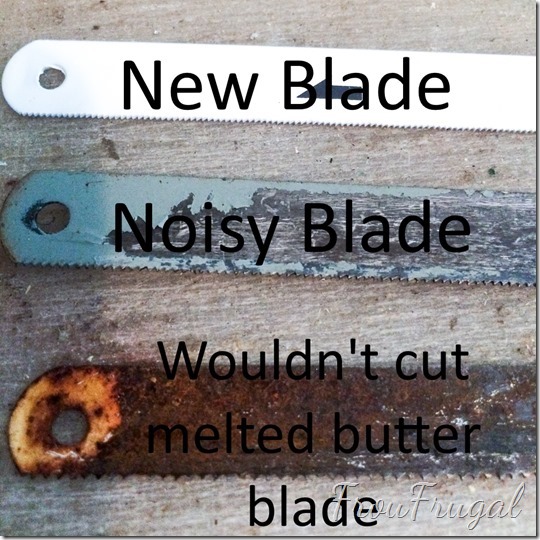 Imagine Hubs sawing away on the metal light bases and me standing with my hands over my ears, frantically searching for the jar of ear plugs or the earmuffs, while yelling, “Highly Sensitive Person! HIGHLY SENSITIVE PERSON!!!

Obviously, I needed another lunch run to get some more supplies. The next night, with a new hack saw blade in hand, I was able to get everything cut to my satisfaction before the heat in the garage did me in. I spent the rest of my time that night, inside the house, peeling the labels off the solar light posts. Sheesh! That was the hardest part of the whole thing!

I have discovered that a paste of baking soda, Dawn Dish Detergent, and a hot water rinse works really well at removing sticker residue. Look at me, doing all the hard work, folks, so you don’t have to! 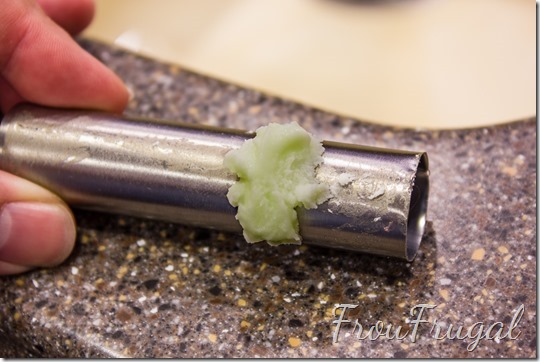 Finally, on night three, I was able to assemble it all together. So again, this is NOT a three day process. It really was about an hour’s worth of work from start to finish. Just, you know, have all the right parts on hand before you start.

You will need to get rid of the electrical parts. I started by unscrewing the finial piece from the top of the chandelier and removing the chain from the finial. I didn’t need the chain for length as I planned to hang my chandelier from a shepherd’s crook. But, depending on where you plan to use yours, you might not want to remove the full chain.

I used a couple of Vise Grips to clamp onto the sides of the chain to give me enough leverage to pull it apart. Next, I simply cut the wires coming out of the top of the chandelier and pushed the leftover cord inside the chandelier body. 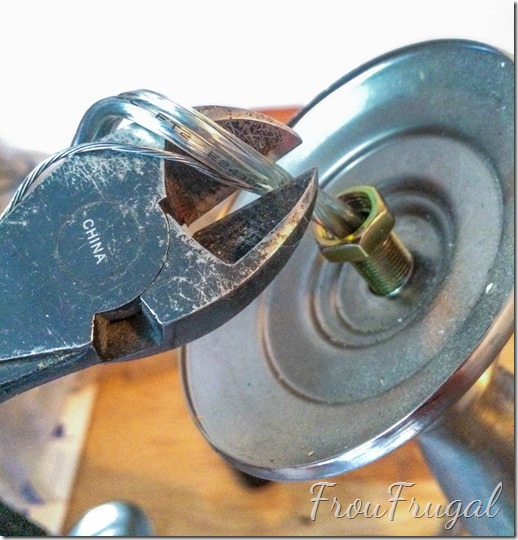 Since I knew I was going to be hanging this chandelier low enough where you could see the top of it, I wanted to turn over the decorative piece at the top. After I cut the wires, I unscrewed the nut holding the chandelier parts together. 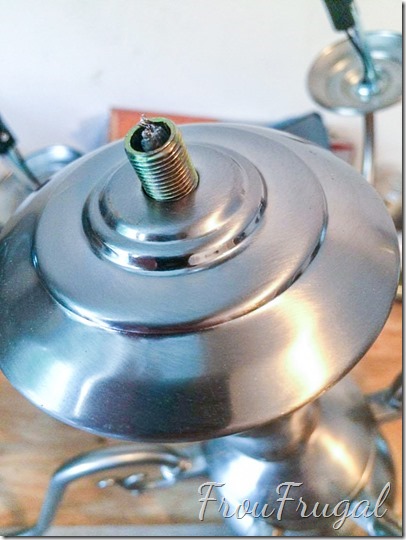 Then I flipped the plate over and screwed things back together. This makes the chandelier look more finished when it’s hanging low enough to look down on it. If this were going to be hanging from the rafters, I would have left it the other way.

If you have a candelabra type chandelier, you will need to remove the candle sleeves. 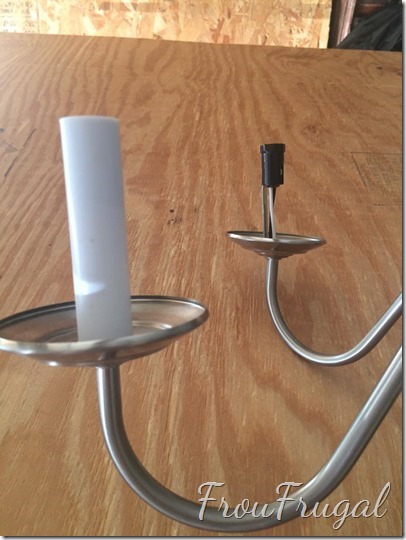 The solar light posts are metal and you already know the story there. Just buy a new hack saw blade and avoid my pain.

Depending on the type of chandelier you have, this step may not be necessary for you. In order for me to get the solar light to fit on the chandelier, I had to remove the socket.  This required snipping the socket wires at the base of the holder.

Unscrewing the socket post from the chandelier and using my handy dandy hack saw (with its new blade) to cut the socket off the post. I’m sure there’s some other way to do this, but I had the hack saw and I knew how to use it, so that’s what I did. Once the socket was off, I screwed the post back on to the chandelier. 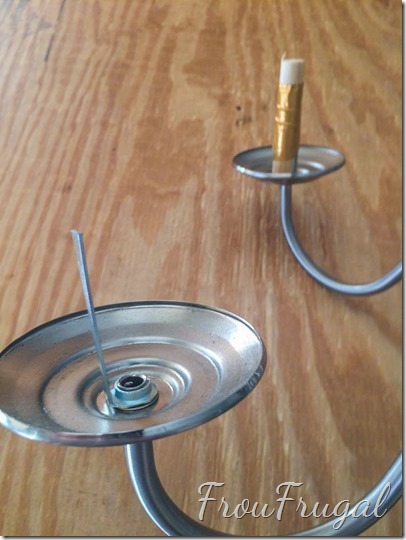 I didn’t think the thin metal socket post was a good base to hold the solar light on to the chandelier. This is where the wooden dowel comes in. I cut the dowel about  ¼ – ½” shorter than the new candle sleeve. I originally thought I would zip tie the dowel to the socket post, but there simply wasn’t enough room for the zip tie. The connection where the zip tie holds together is pretty fat. 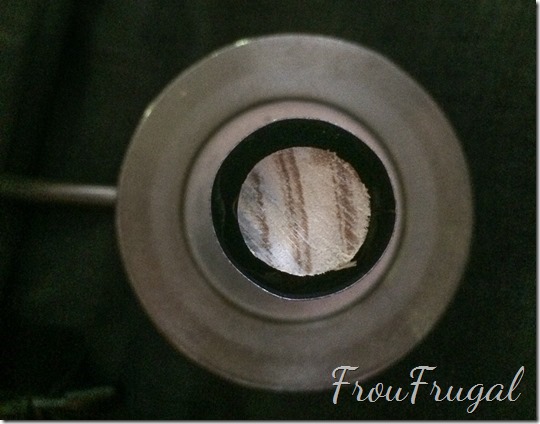 You can’t see it in the picture but the socket post fills the gap on the left side of the dowel. Plan B, included Duck tape. 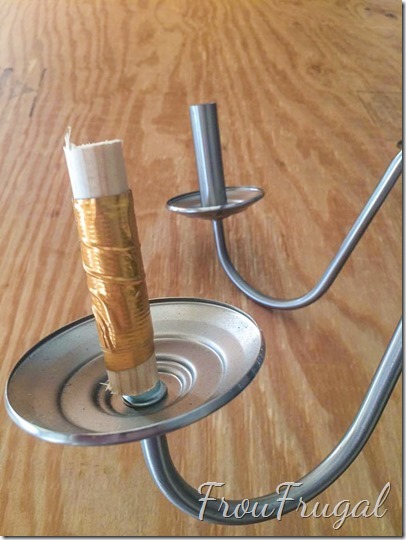 I used about an 8” strip of tape and wound it around the base and the dowel, making sure it was on there nice and tight. The bottom of the dowel is resting on the screw part of the post that holds it on to the chandelier.

I’ve had some friends ask me about making one for them. If I do it again, I will buy some velcro cable ties to hold the dowels in place.

This is the easy part. Once you have the bases ready, simply slide the new candle sleeve in place and pop the solar light in the sleeve (former post). 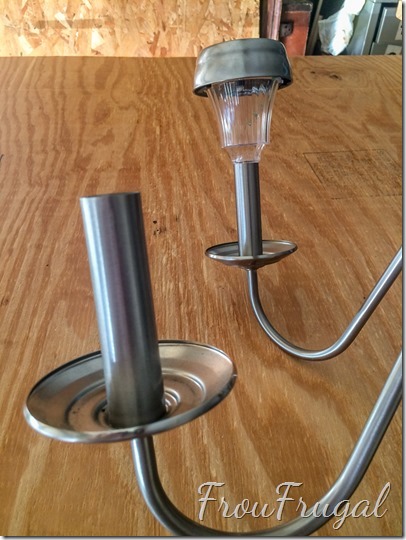 I had planned to glue to posts to the bottom, but honestly, there’s really not a need to do that. These are securely on the chandelier and are not going anywhere.

The last step is the hang the chandelier in a place where it will get enough sunlight to charge the solar lights. I love the idea of the chandelier under a tree, but all of our trees offer too much shade. We have a shepherd’s crook, though, that’s a good height for the chandelier. 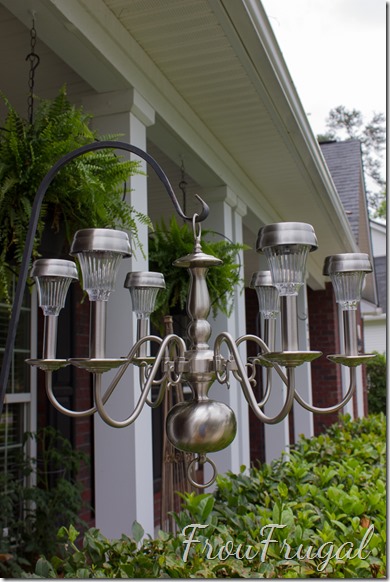 I’m really happy with how it turned out! I love the finish of the solar lights. The solar lights are a great match to the original chandelier and look like they were always meant to be together. 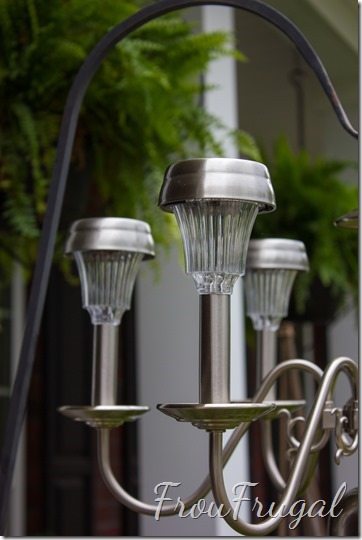 It lights up our entry way at night to where I don’t feel like I need to keep my front porch light on all night long.

There you have it. Seven easy, doable steps to make your own solar light chandelier. The total cost for the chandelier, without my costly mistakes, was around $20. With my mistakes, it was about $30. Maybe $35. The zip ties are something I frequently use and the first set of solar lights are in my garden.

It’s a fun, cheap and easy way to add a little zing to your outdoor space.

If you want to see my other lighting projects, be sure to check out my Edison bulb chandelier, my Industrial Sconces and the Fandelier, and my Mason Jar Light project. If you enjoyed this post, please share it with your friends! 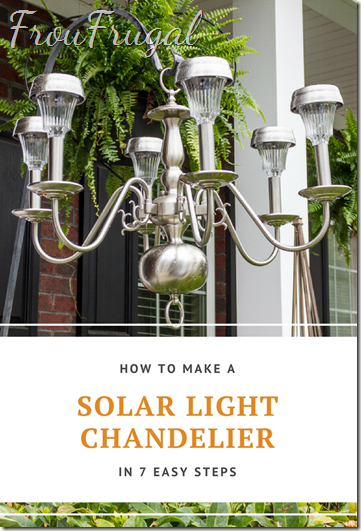 Author: Frou Frugal
An Update and a Hint of Things to Come