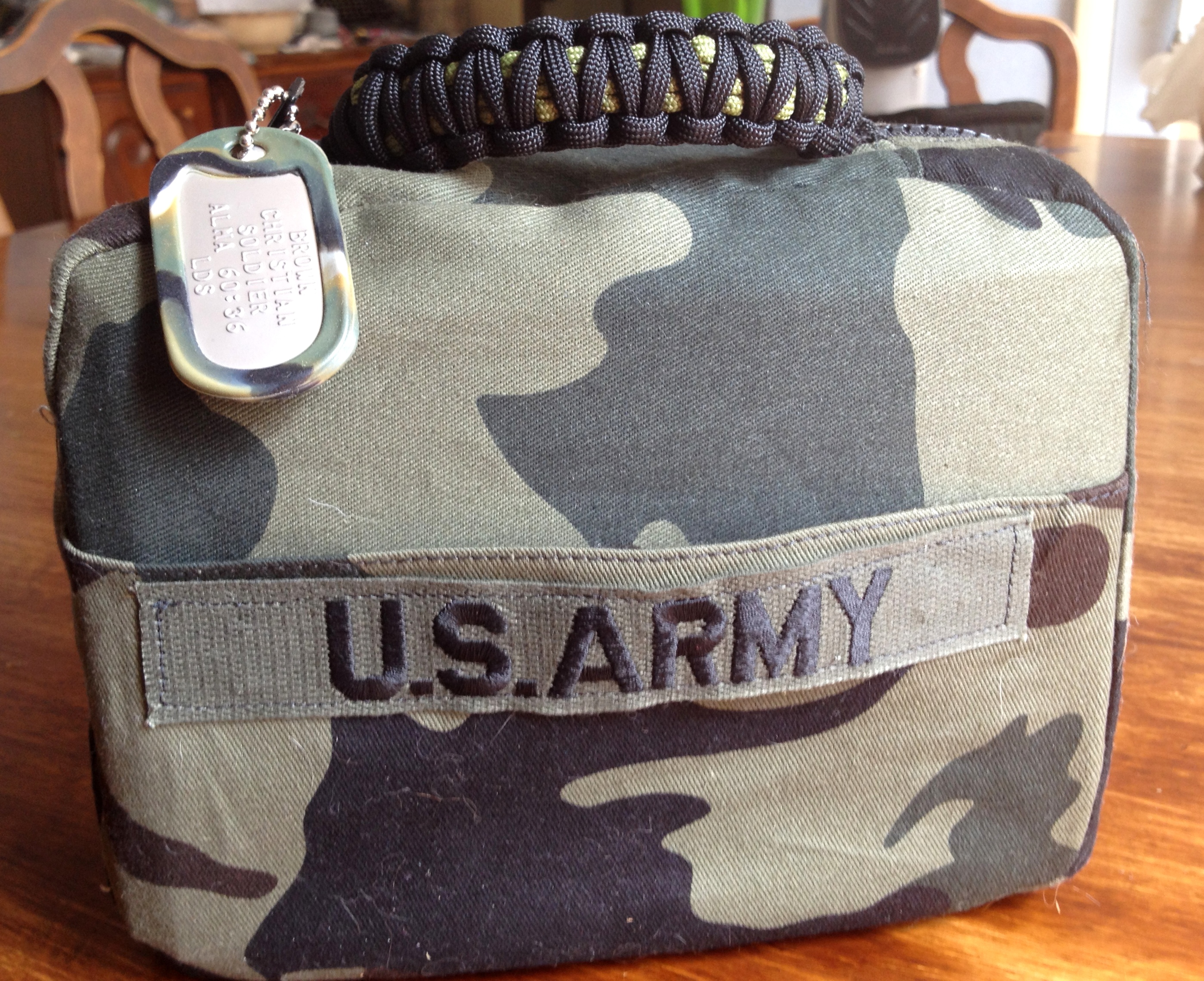 I really should be upstairs right now, getting the dye on my hair and finishing my packing before I get on a plane today. I’m flying out to Utah to go pick up Katie, my sister-in-law. (I made this shirt for Katie for the Valentine’s Dance. Katie LOVES music and loves to dance).

I’m not going to lie. It’s hard to be a full-time caretaker. I’ve been on hiatus for four months and I desperately needed the break. I have loved every single second of my freedom. Don’t get me wrong. I fully appreciate the fact that as far as taking care of someone with special needs goes, we have it easy. Katie has a calm nature and even though she is somewhat prickly at times, its pretty easy to get her to do what she needs to do.

Having said that, though, she does not have the capacity to think about her own needs. If she’s hungry, she doesn’t go make her own food or even tell you that she’s hungry. Which means you have to constantly think about making sure she’s eaten. Living in a house with teenage boys should help you appreciate the fact that Katie is the only person I have to do this for. 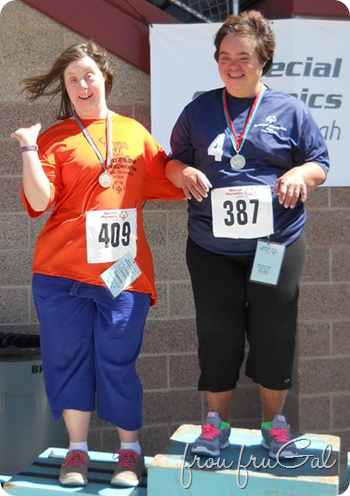 She doesn’t always understand what she is feeling or what she wants or needs and if she thinks she wants something but can’t have it right then, she is usually incapable of understanding the reasons why she can’t have it. This is often hard for me because I’m one of those people that doesn’t just feel my own feelings, I usually feel other people’s as well.

This is especially hard on me when Katie wants to be in Utah but it isn’t time for her to go back. Usually, I can blow it off and not let it bother me. Trust me, there’s no realistic way to be in the caregiving business for the glory or thanks because there isn’t any. But sometimes, when you’ve done things for a person that you find unimaginable (I will spare you the details on this, but trust me, I’ve done some things you wouldn’t dream of having to do) it’s hard when that person you are caring for tells you they want to be elsewhere.

Truthfully, usually in those hard moments, those are my thoughts too. I’d much rather have her elsewhere in those moments and have someone else deal with her messes. I’d love to not have to do the hard things. Last year when Katie came, our life got crazy. She came out with my daughter, my niece and nephew. We spent a long week showing them the sites and playing in our state. Then they left and week later we moved to a new house.

Then everybody got sick. Montezuma’s revenge to the nth degree kind of sick. Then we moved Katie to a new day program and found her a doctor (a special kind of challenge all on its own). We tried to work on issues on the house, which were many. Our daughter moved back home for a few months before her mission. Band season kicked into gear. If you’re a band parent, you know what I’m talking about.

Katie loves going to see Noah in the band. It’s one of her joys. If we say anything about band, she says, “I’m going!” She loves it and she loves watching the cheerleaders at the football games. She yells for the teams, even the opposing teams and generally has a great time.

Both boys also had different schools and different schedules which meant driving 2.5 hours a days for the first month or so of school and then only 1.5 hours a day after that until February when Noah got his license. Then there was the whole getting the girl ready to serve a mission for our church which meant marathon sewing sessions to get her a modest wardrobe. Not to mention the whole I-Miss-My-Girl syndrome that I went through once she left. 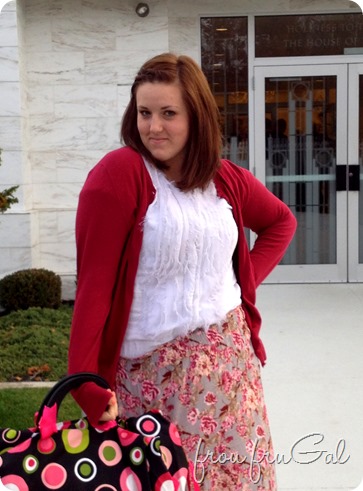 So, anyway, life was hard last time she came. Things have settled down now, but it’s hard not to feel like it’s all going to go to heck and back again when she comes back. I associated all the trials of last year with her. Not fair, and I recognize that, but still how I feel.

Lest all these smiling pictures of Katie fool you, she is not often smiling. It’s more of a rare event which is why it is so fun when she does smile. I like to describe Katie as the someone with the needs of a toddler, the attitude of a teenager and the preferences of a little old lady – all in one fun package. It’s a challenge, but I love her and ready or not, she’s coming back. My challenge will be to put aside my fears and just take things as they come.

I still have a kitchen to remodel. Other then finishing some board and batten behind the microwave area, I haven’t done anything else since my June update. It’s been pretty much raining every day since that last post. It makes it hard to cut wood outside when there is a monsoon going on.

I did make this cute scripture bag for my nephew who I will see tonight. 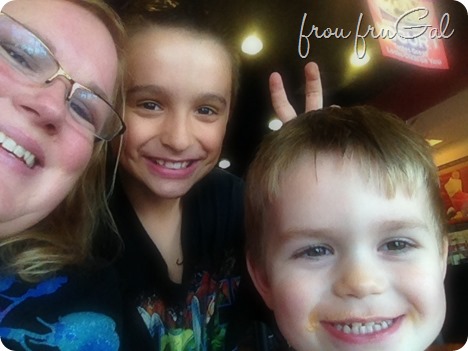 He turned 8 a few months ago. I had made scripture bags for his sister’s eighth birthdays (see here and here), but in the madness of the last year, I failed to make one for him. #BadAunt 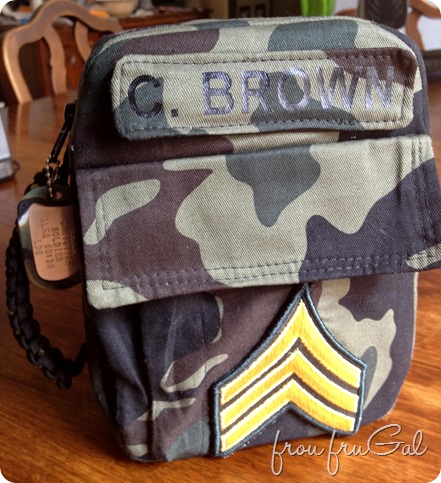 He loves military stuff so I ran with the theme. I ordered a custom dog tag for him which I used as a zipper pull. 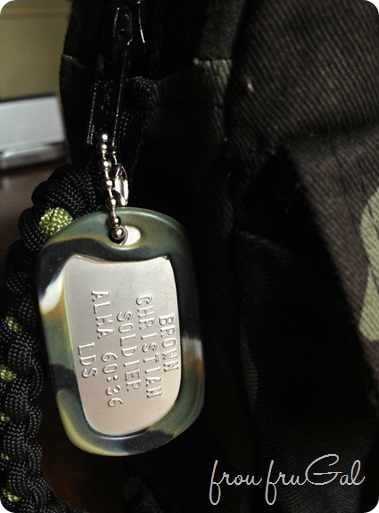 The scripture reference is from the Book of Mormon. It is about a prophet named Moroni who loved and fought for the freedom of his people. It reads:

Behold, I am Moroni, your chief captain. I seek not for power, but to pull it down. I seek not for honor of the world, but for the glory of my God, and the freedom and welfare of my country.

Not a bad goal to aspire to, in my humble opinion.

Noah started making paracord bracelets this past year so I swiped some of his extra cord and did a braid on the handle. 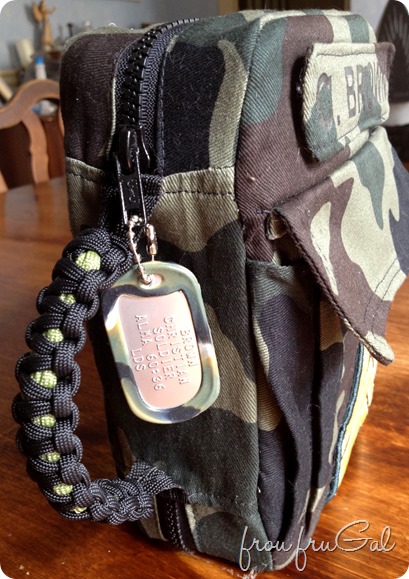 We have an Army surplus store in the next town over so I took a swing out up there to pick up the patches I sewed on the case. 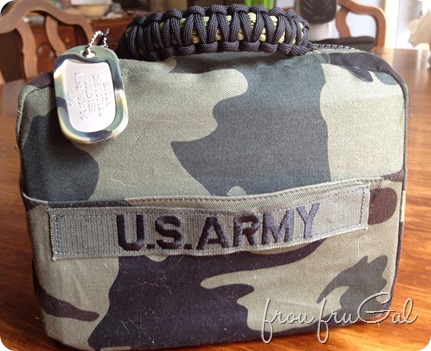 I’m happy with how it turned out, which you would never know with all the cursing and grumbling I did along the way. Kind of ironic that making a scripture case would bring out my ugly side. Trust me, that irony is not wasted on me. #SadButTrue This bag is not my best work and is not going to win me any awards except for maybe Aunt Of The Year, which I will gladly accept and can live with that. My perfectionist gene is being kicked to the curb even as you read this.

I had intended to do a tutorial and I still might. It got complicated to do while I was ripping things out – repeatedly. I made up the pattern using a scripture case that we have as a reference. I still have leftover material from my nephew Kale’s Army coat. When Kale died, my sister sent me one of his coats and asked me to make a purse out of it for her. 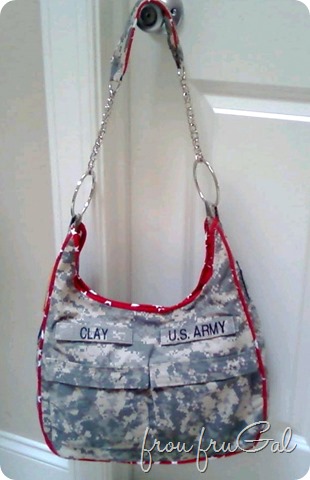 I will use the leftover fabric to make a case for my brother-in-law. Since I know how to make one now, I’ll do a tutorial on it when I make one for him.

At any rate, ready or not, I get on a plane today. I am meeting with this awesome lady while I am out there.

I reached out to Stacy from Not Just A Housewife to see if she’d like to meet and go to lunch. I’m excited to meet one of my blogging heroes. I love how she is willing to make things. The girl knows how to rock a power tool, which is definitely my kind of girl!

Okay, I really need to go now. These roots are not going to cover themselves. #GoAwayGray! Wish me luck that Katie’s transition back into our home and our lives is a smooth one. I have a kitchen to finish and a whole lot of other projects to get done.