Halloween around these parts is always an adventure. Hubs and I usually go all out.
Case in point, here are some of the award-winning costumes we’ve produced over the years.This is me and Man-Child when he was 2. I enlarged the pattern from one I found in a magazine. We were the fish family for a couple of years because we kept moving (Hint: moving makes everything you own “new”). 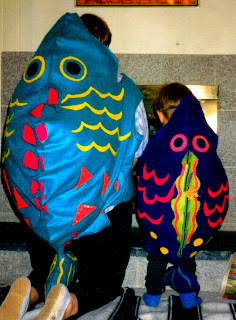 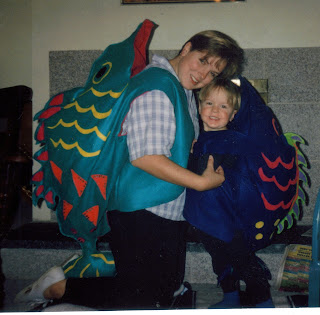 Several years later, here is a costume I made for Buddy. Now that I think about it, though, the following costumes came about BECAUSE of the fish costumes, which we’d entered in a city-wide contest (remember moving=NEW). We won in the adult division for the contest and then had a reputation to uphold, hence the following costumes. Yeah, I’m not at ALL competitive 😀 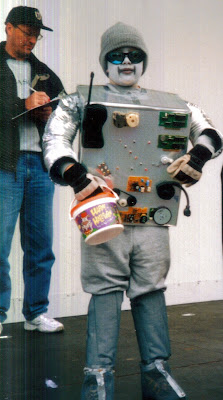 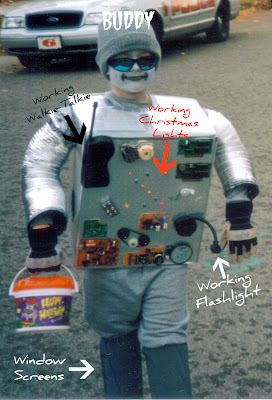 Buddy took first place in his division that year. However, Kiddo was forced to be a clown. Check out the worlds saddest clown. He later told me how jealous he was that Buddy got such a cool costume and he had to be a stupid clown. You can see by his face in the picture on the right just how jealous he was of Buddy! Poor Kiddo. 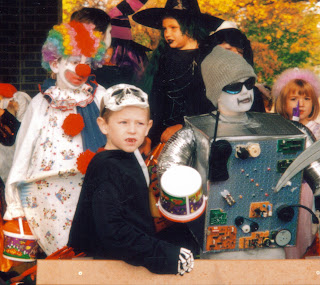 The next year, I totally made it up to Kiddo with this costume. I made him the Alien Encounter Costume from the Family Fun Magazine.
Look at the witch checking out Kiddo. This is pretty much the look everyone gave him.

Grown men stopped to stare at this costume and you could see how badly they wished they could have such a cool costume. It was quite funny. Plus, people kept asking us how we got the two boys to walk together so well. They really thought there were two people in this costume. 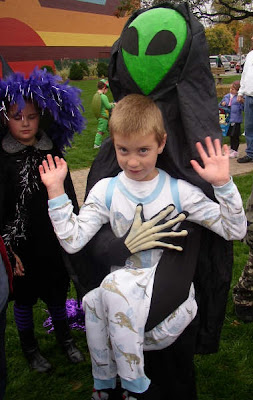 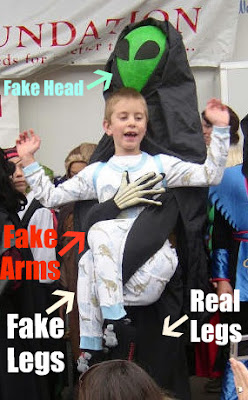 On a funny note: the reason why Kiddo has his hands in the air is because we told him that during the judging he should say, “Help! I’m being abducted by an Alien.” He was very scared to do this and it took some encouragement on my part, but he totally pulled it off. I think I’m most proud of that moment–a great costume AND a show!

Now it was Buddy’s turn to be jealous. Buddy’s costume that year was reworking a Mad Scientist costume that Hubs wore the previous year. Buddy kicked it up a notch, though. 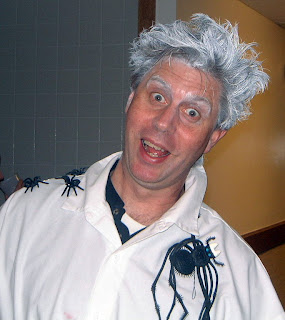 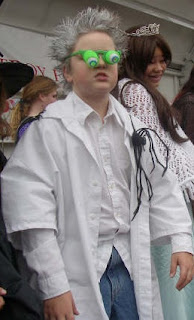 For some reason, I couldn’t find costume pictures of the Daja and Man-Child. I’m not always the best picture taker in the world.

For a number of years, these ghost kids were placed in our yard. 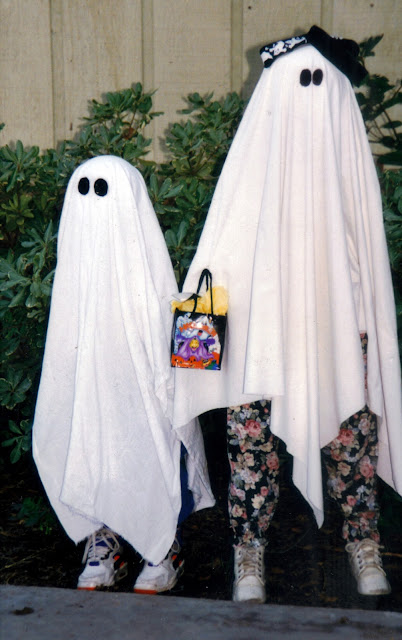 They were made out of a styrofoam ball for the head, a wood frame for the body that was dressed in the kids’ old pants and shoes (complete with holes in them – we go for the authentic look around here). An old sheet, some black felt for eyes, a bow for the Daja ghost and a bag for their candy and we had some fun statues. Sadly, these ghost statues are long gone, but they were a great decoration for the yard.

The first year I had these in the yard, the neighbor wanted to know how I got my kids to stand so still in the yard for so long. Ha! Clearly he did NOT know my kids.

Another idea that we got from the Family Fun Magazine was our Jeff statue. 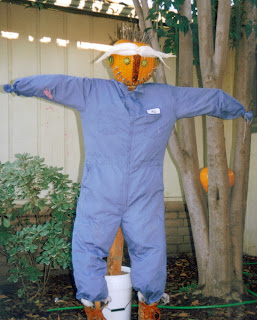 We try to make Jeff every year, but it’s more a hit-or-miss kind of thing. He’s called Jeff because that’s the name on the coveralls, which has long since been removed, but the name remains. Jeff usually has a pair of work gloves on for his hands.

As the kids have gotten older, our decorations have gotten creepier. The last few years, Hubs and the kids made fake tomb stones for the yards. We have a smoke machine, flying ghosts, spooky music, black lights and whatever else Hubs dreams up.

I kept the alien glove hands from Kiddo’s costume because they glow in the dark. I wear them when I hand out candy because the black light is by the door. I wear all black so the hands really look good.

I don’t much feel like decorating for Halloween this year. I have plenty of Fall stuff around, but for some reason, my hearts not really into the Halloween stuff this year. I’m letting Hubs handle all of that. On second thought, maybe I’d better jump in and take this over, Hubs has a tendency to get carried away when it comes to Halloween.

I was seriously tempted to throw in the towel today on Day 4. That just seems so lame, but I’m not going to lie, today was a hard day for me. 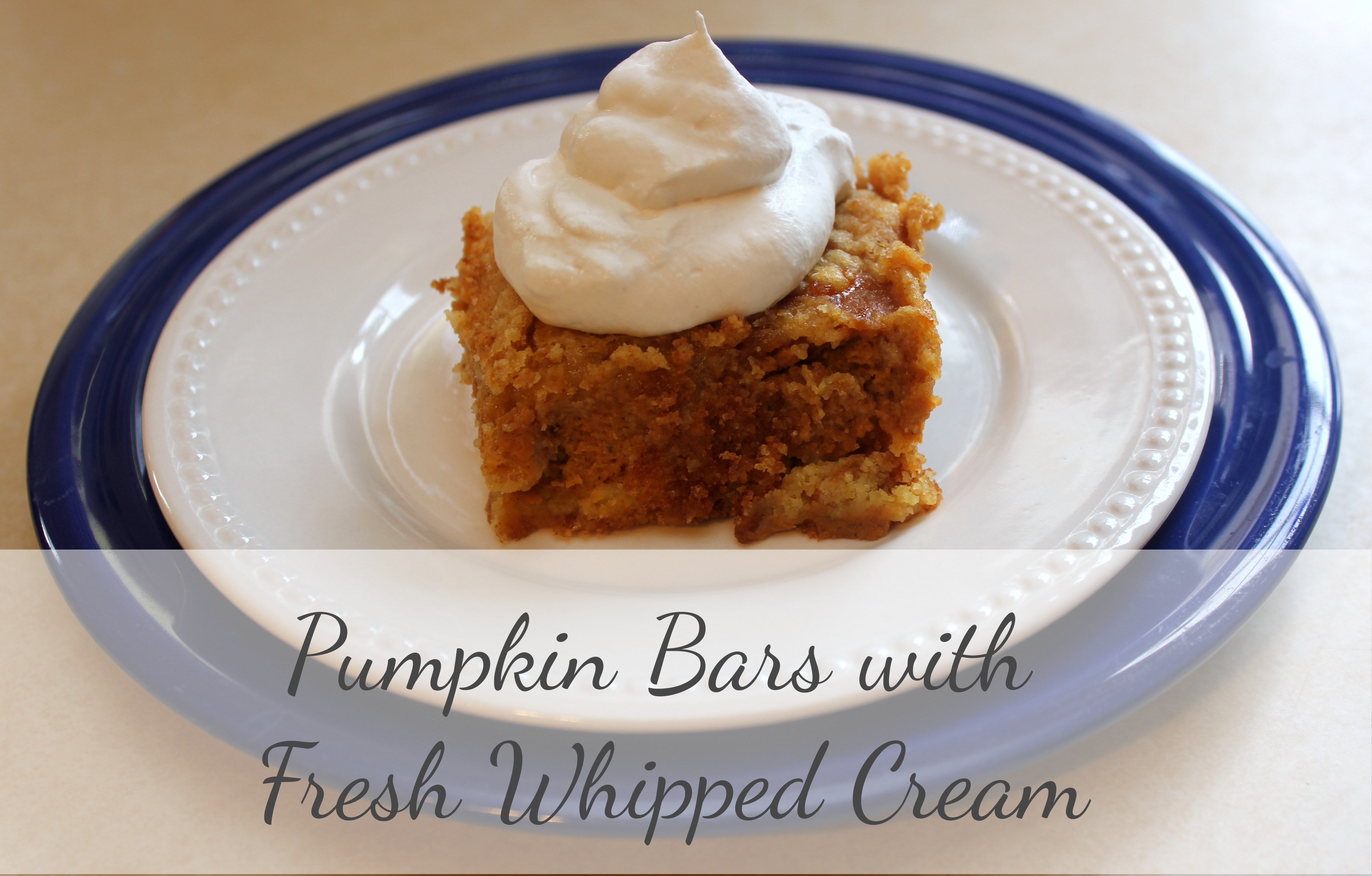 One of the best things about having lived in so many different places is the different recipes I’ve come across. I’ve been so blessed to know some very talented women who have all been very generous in sharing their recipes with me. Case in point, […]